The Vaccine "Free for All"

Independent policy experts have been highlighting that vaccines should be "free for all".  Instead we have ended with a vaccine "free for all" policy where states have to compete with each other and the center for vaccine supply.  It is set to become a "no holds barred", "free for all" battle for vaccines. 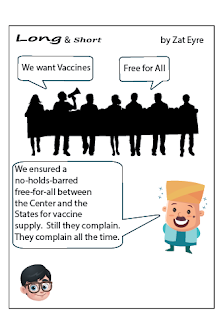 Why should vaccines be free? An extreme argument offered by health experts is that unless everyone is vaccinated, no one is safe. It is reasonable to say that a high percentage of the population needs to be vaccinated, to ensure fair protection of the population and early return to normalcy. Maximisation of vaccination is possible only if it is free. People who can afford it should be able to opt for costlier vaccines or vaccination process.

The vaccination policy of the country was riddled with mystery.  Elements of the mystery include:

1. An "atma nirbhar" wait to approve vaccines for use in India, while one vaccine was already being manufactured in India and exported abroad;

2. An "atma nirbhar" refusal to approve import of vaccines that were already approved and being used in other developed countries;

3. A limited order of about 100 million units of vaccine supply - enough for the dual vaccination of about 50 million people out of a population of 1.3billion.  Maximisation of vaccination was clearly not considered;

4. Non-transparent allocation of vaccines to the States.

When the supply constraint blew up with the second wave, the initial attempt was to blame it on wastage of vaccines in the states.  We order 5 per cent of requirement, and the blame falls on the 5 per cent wastage!

Wastage is no doubt a problem.  But some wastage is unavoidable in the process of transportation logistics.  Further, when the same vial has multiple doses, some wastage during vaccination is inevitable.

The opposition built pressure on the Central Government to open vaccination for all adults, instead of limiting it to people who are 45+.  Unbelievably, the center yielded.  With more people joining the vaccination queue, the supply constraint problem aggravated.

One would have expected the center to at least make its vaccination allocation to the states more transparent.  Instead, the supply problem was queered further, by making the states (and private hospitals) buy vaccines directly from the manufacturer, at prices higher than what the center would pay.  50% of the vaccine supply was to go to the center, while the 28 states and 8 union territories would have a "free for all" fight for the balance 50%.  The early states quickly found from vaccine manufacturers that 100 percent of vaccine supply was already tied up with the Center for several weeks.

Belatedly, foreign vaccines are now approved.  In the meanwhile, other countries have already logged their purchases in the international vaccine supply chain.

Posted by Sundar at 6:34 PM No comments:

The judiciary of the country appears to be shaken by the pandemic.  The timing of this awakening matches the appointment of the new Chief Justice of India.

One High Court after another (Delhi, Karnataka) is ordering the Central Government to ensure supply of whatever oxygen the respective Chief Minister (CM) asks for. The Supreme Court refuses to stay such judgements. Oxygen supply is constrained. The center finds itself pushed to the corner. 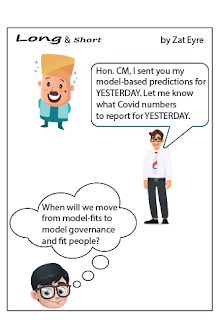 CMs are bound to exaggerate their requirements. A most basic approach would have been to draw a transparent state-wise oxygen allocation plan, based on objective measures such as number of serious cases and deaths. This will have the salutary impact of getting states to report their real numbers, without any cover-ups.  But then, it shows a worse (but real) face of the country to the world, than it already is.   Yes,  this will remove the Central Government's discretionary power.  But that is a better situation than being cornered by multiple high courts and the supreme court.

One gets the feeling that the government is missing on the fundamentals to manage the pandemic.

Posted by Sundar at 5:50 PM No comments:

Sundar
My more public image is that of Author, Indian Mutual Funds Handbook [2016, 5th ed], Wealth Engine: Indian Financial Planning & Wealth Management Handbook [2012] and several other publications. Am otherwise a very private person.
Nothing gets me more intoxicated than a cerebral discussion and, as the great ad punch line says - "Keep Walking"